At the end of February it was the Town Council Election for the Cefn Saeson ward where Megan Poppy Lloyd stood as a Green Candidate. The election was called after the Labour councillor, Alan Carter, sadly passed away late in 2019, leaving a vacant seat on Neath Town Council.

In the last round of local elections in Wales, three Labour councillors were elected unopposed in the Cefn Saeson ward. Upon discovering that none of the other main parties planned to field a candidate, Neath Constituency Green Party made the decision to field a candidate.

Following this short campaign, with only two dedicated and hardworking canvassers we gained 44.2% of the vote!

Neath was only 56 votes away from having its first Green Town Councillor, this couldn't be done with out the help of green party members and supporters volunteering donating their time and energy. Thank You to everyone involved in this campaign. 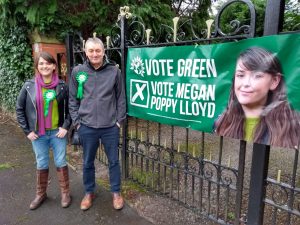